Thomas and Friends - Happy Little Helpers is a UK VHS/DVD release by VCI and HiT Entertainment on 6th October 2003.

THOMAS & FRIENDS are back with 8 exciting new episodes never before seen on video/DVD. Join Thomas, Percy, James, Edward, Toby, Donald and Douglas, Oliver, Emily and The Fat Controller for more action-packed, helpful adventures on the Island of Sodor. Included on this video/DVD are: 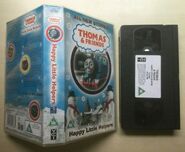 Add a photo to this gallery
Retrieved from "https://video-collection-international.fandom.com/wiki/Thomas_and_Friends_-_Happy_Little_Helpers?oldid=64475"
Community content is available under CC-BY-SA unless otherwise noted.